In early June I once again took off 10 days to go fishing in Ontario with my dad, brother-in-law, nephew and a few others. From Minneapolis we drive up through International Falls and spend the night in Dryden, Ontario. The next morning we drive from Dryden to near Sioux Lookout. On a little river we meet up with a long boat that picks us up for another ride through the North woods of Ontario to Ghost River Camp. It's beautiful country. With great fishing and even better company, this is a vacation I try to take every year.

Check out the photos!

Also check out my videos on YouTube. Including video of a couple of Moose sightings!

Rest Easy and Get Well

I was at the Soboba show and was proud to see how Gene, along with Tommy and Eric, rose to the top under the challenge of a very difficult situation. Gene, everyone could feel your deep concern for Paul. You did an amazing job leading the show and leading the KISS Army. I enjoyed the show, amd will remember this show above all other shows, but there was clearly a hole on stage. A hole that only someone with Paul's voice and presence could fill. Paul, do what you need for your health. You have given us all so much that I would hate to see you jeopardize your health for a performance.

My thoughts and prayers go out to Paul and the band.

Rest easy and get well.

Posted by Michael Brandvold at 9:24 AM 0 comments

Report on the KISStoric Show, July 27

Last night an extraordinary page was written in KISSTORY. At the Soboba Casino in San Jacinto, California, last stop of the band’s 2007 ‘Hit & Run’ mini Tour, KISS performed as a TRIO for the first time ever. Immediately following the band’s sound check, Paul Stanley suddenly fell ill, with what was later determined to be a “cardiac event”.

Once it was determined by emergency medical staff that Paul could not perform, there was talk that the show would need to be canceled. It was Paul himself, who insisted that the band play the show without him. Paul was concerned that fans had traveled long distances and because of the band's individual schedules the show could not be rescheduled.

KISS Manager Doc McGhee then took the stage to announce to the crowd that Paul was sick and unable to perform but that Gene wanted to speak with the fans. Gene asked the audience if they wanted him, Tommy & Eric to perform. The crowd responded with a defeaning chant of yes, yes, yes. With that, Gene announced that the concert (If they could pull it off), was a tribute to “The Greatest Voice in Rock and Roll - Rock God Paul Stanley”.

With Paul en route to the hospital - Gene,Tommy and Eric played their hearts out in honor of their stricken leader! The set list evolved as the night progressed and KISS blasted their way into the hot night air - valiantly trying to hold it together minus the band’s heart & soul. In an emotionally charged moment, Gene told the crowd that he was an only child, but nevertheless had a brother – Paul Stanley! ‘Christine Sixteen' brought 11 invited fans onto the stage to help perform the song, and added a bit of lighthearted fun to the pensive night.

The trio went on to perform a full set including classics and rarities - ‘Watchin’ You’, ‘Goin’ Blind’, ‘Nothing to Lose’, ‘Black Diamond’, ‘Cold Gin’, ‘She’, and ‘Parasite’. The sold out arena was filled with dedicated fans who appreciated what a unique night this really was, despite its bittersweet nature, and rocked hard & loud. As the final chords of ‘Rock & Roll All Night’ were struck, and the last jets of flames and confetti shot into the night sky, everyone realized what they had just witnessed was simply great music performed by dedicated, extraordinary musicians who really gave it their all, and then some.

Another thing every KISS fan at the show last night realized - is just how lucky we are that our favorite band, led by the greatest front man in Rock N Roll PAUL STANLEY, cares so much for us fans!

Get well soon Paul - we all love you!

Posted by Michael Brandvold at 9:17 AM 0 comments

Paul Stanley Taken to the Hospital

During sound check yesterday (July 27), my heart spontaneously jumped to 190 plus beats per minute where it stayed for over an hour necessitating paramedics to start an IV and give me a shot to momentarily stop my heart and get it into a normal pattern. Not knowing if this episode was life threatening made it even more exhausting. After consulting with both the paramedics and a cardiologist at Cedar Sinai, they confirmed my worst fear. They said that I would put myself at risk if I tried to do the show.

I’m very proud of Gene, Tommy and Eric for carrying on without me. I apologize to anyone I disappointed and I’ll make it up to you when I see you again.

Posted by Michael Brandvold at 9:16 AM 0 comments 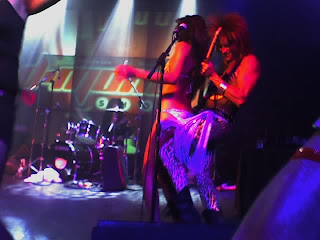 New concept, drunk blogging! What do you post after you have had more Jack and Cokes then you can remember ( or at least it hurts too much to think hard enough to figure out!).

3:28am, back at the Hard Rock Hotel. I don't want to go to bed quite yet, because the bed just might start to spin and we all know that is not good! Just got back from a great evening at Treasures (Gentlemens Club) and Empire Ballroom (Metal Skool... F*&King Metal Rules!) Had a 24 oz Rib Eye at Treasures that was amazing! For dessert (too S's because you want seconds!) I enjoyed the buffet of 5 dances. Thanks Uncle Mike!! From there the limo took us to Empire Ballroom for the Players Ball featuring Metal Skool. The first band just plain BLEW! Metal Skool rocked dude! I was right up front fist in the air and head banging! Check out just one of the pictures from their show.

OK I need to stop because my fingers are not typing what my brain wants!

Posted by Michael Brandvold at 3:24 AM 0 comments 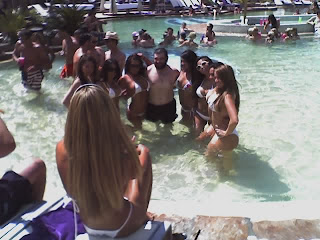 So I arrived in Las Vegas yesterday, staying at the Hard Rock Hotel, for another business trip... the XBiz Convention. Guess what, IT'S DAMN HOT! They keep saying, "it's a dry heat." Well screw that, it's still 108! My oven is dry heat, I'm not going to sit in it, lol!

Anyway the Hard Rock Hotel is awesome, the pool area is amazing. Especially since our show took over the entire pool area. Here's one picture of the sights, more to come.

Posted by Michael Brandvold at 7:29 AM 0 comments

Time To Catch Up

It's way too long since my last post, so this weekend it's time to catch up. Lots to add, stay tuned!